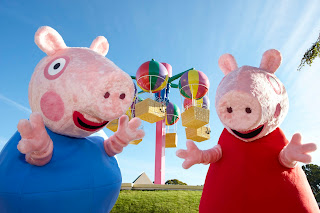 Peppa Pig world, a large section of Paultons Park, Hampshire dedicated to everybody favourite Pig, Peppa and her family and friends!
Last weekend we took the girls to Peppa Pig world which was our 3rd visit.  The last visit was in September just before the children went back to school after the summer holidays, the Park was jam-packed and we had to que for each ride for atleast 40 minutes!
This time, the park was less busy, with only 10-15 minute ques for rides. Maybe something to do with the awful weather the day before? As always, we did the 2 day Paultons tickets plus hotel including breakfast, which cost just over £200. Nut much more than you would pay for 2 day tickets without a hotel!
There are quite a few hotels to choice from, some of which are beautiful hotels with amazing Spa and Swimming pool.
We usually stay in the Marriott in Southampton, which is lovely. This time we stayed at the Solent, Portsmouth. A very classy hotel, lovely breakfast, very child-friendly! They left juice, biscuits and sweets for the girls in our hotel room!  I would definitely recommend this hotel for anybody staying in the area. 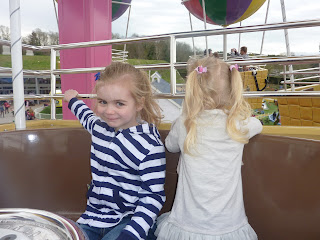 The Balloon Ride - My fave ride!! 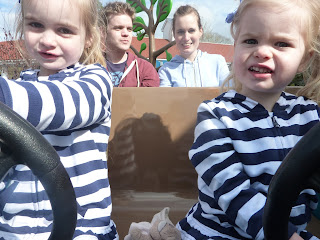 With 6 colourful fun Rides, a brightly coloured play park with plenty for toddlers and children up to age 8, a small water park and a Indoor soft play area, Cafes, Ice cream and Hotdog stands, Prize winning game stands, meet and greet Peppa, George and friends, there is PLENTLY to do at Peppa Pig World!  and if it's busy you probably won't get to do it all in 1 day, which is why i strongly recommend the Hotel and 2 day pass deal.
Although it is exspensive, and even after tickets you will probably spend another £50 in the park on food and gift shop (depending on how many children you have, we spent £100!) and also fuel if you are traveling long distance. I still think a day out here is worth every penny!!
It is a day out that your little ones wont forget in a hurry!  and if you want to save money, you can bring a picnic along. There are plently of picnic benches around the park, and food in the park is rediculously over priced!! 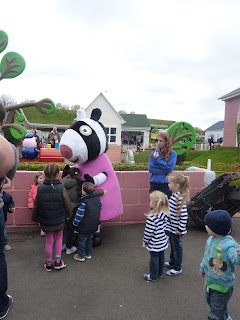 with 3 daily appearances from Peppa and George, your little ones will get to meet and shake hands with them.  Peppa's friends walk around the park for around 10 minutes every hour or so.
You have to be quick to get a picture with them! 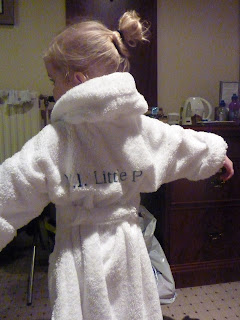 The solent hotel left dressing gowns on our bed, and 2 mini "V. I little P" gowns for the children,  which they used after they got out of the swimming pool. 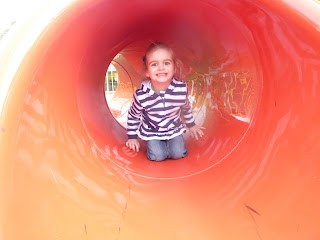 So, thats pretty much everything I can tell you about Peppa Pig World!
Is it worth the money? Yes!  It is a must for any Peppa Pig fan, and will be enjoyed by adults too. If your child is below school age I would recommend visiting in school time through the week as the park will most likely be quieter and you won't have to que for too long! 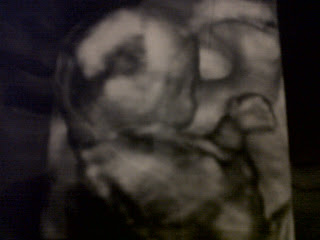 On thursday I went for my 4d Babybond Gender scan. It was sooo exciting and a lovely
experience so I thought I would review it! :-)

The scan was at Babybond in Exeter, we arrived a few minutes late as we had trouble finding it but the staff were very nice and didn't mind that we were late!
We were taken into the scan room, which is very different from the NHS hospital scan rooms!
It was tastefully decorating with a lot of cosy chairs around for partners and family!

The scan was shown on the huge tv screen, and the Sonographer used HOT gel on my tummy rather than the freezing cold stuff i'm used to!!
She checked the babys heartbeat and then right straight to the babys AREA!  She knew within seconds what the baby was and let us look for a while.
She then let us watch the baby wiggle around and move. We had around 10-15 minutes to watch our baby.


We were given 7 pictures of the baby, 2 of which were "gender shots" and she gave us a gender coloured bag to put the pictures in.

As you have probably guessed i'm not giving anything away about the babys gender!
I will put the babys potty-shot up if you would like to have a guess :-)

After my 20 week scan in May i will report back with Babys gender, and hopefully I can then
give Babybond 10/10 if they have got it right!!!
I have heard a few stories of them getting genders wrong with both Girls and Boys, however I think most of the time they do get it right! 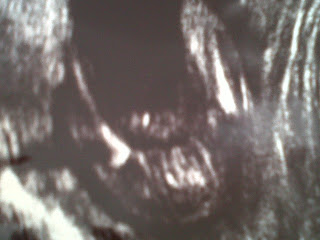 Potty-Shot!
This was a lot clearer on the actual scan then in the Pics. 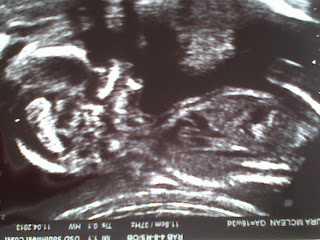 Our Babybond Gender Scan cost £79.
If they have got it right then i'd say it was worth every penny! 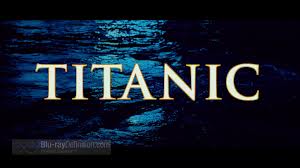 I know.. its a very different post!!!!   I thought this would make a change from my usual mummy/pregnancy posts :-) and I do hope some of you might find this post interesting and not like a boring history lesson!!   I am a Titanic fanatic so i thought it would be good to write a bit about Titanic as it will be the 101st anniversary of the disaster on Sunday 14th April.
I hope you enjoy it :-) 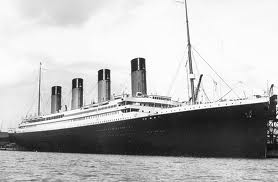 Today, 101 years ago, Titanic set sail on her maiden voyage. She set sail from Southampton
and headed for New York, with 2, 224 passengers on board. On the 4th day of Titanic's journey, at around 11:40pm, she struck an iceberg which coursed the hull plates to buckle and fill with water.  Many of the passengers remained calm as they were not fully aware of what had happened and they didn't know there were not enough lifeboats for everyone aboard.  At 12:15am, distress signals were sent out. Passengers and crew were evacuated in Lifeboats, some of which were only half full.
Women and children were to be evacuated first, leaving the men to say goodbye to their wives and children.

At 2:20am the ship sank with over 1 thousand people aboard. In the end, the sinking took the lives of 1,347 men and only 103 women. Most of the crew also died during the sinking of the Titanic. There were 899 crew members and 685 of them died during the tragedy. Children also had a high fatality rate, although there weren’t as many on board. 53 Children died which was about half the number of children on board. 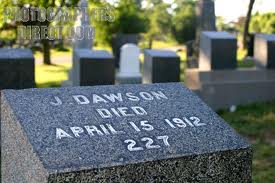 Most of the recovered bodies are buried in Novia Scotia, Canada.
The unidentified bodies were buried at Sea.
The last Titanic survivor was 97 year old Millvina Dean, who died in 2009.
She was just 9 weeks old when she boarded Titanic, she, her mother and 2 year old brother escaped on a lifeboat, but her father perished in the disaster and his body was never found. Facts about Titanic
Canceled Lifeboat Drill
Originally, a lifeboat drill was scheduled to take place on board the Titanic on April 14, 1912 - the day the Titanic hit the iceberg. However, for an unknown reason, Captain Smith canceled the drill. Many believe that had the drill taken place, more lives could have been saved.

The Titanic's Newspaper
The Titanic seemed to have everything on board, including its own newspaper. The Atlantic Daily Bulletin was printed every day on board the Titanic. The newspaper included news, advertisements, stock prices, horse-racing results, society gossip, and the day's menu.


Only Two Bathtubs
Although most passengers had to share bathrooms (only the two promenade suites in first class had private bathrooms), third class had it rough with only two bathtubs for more than 700 passengers.

Corpses Recovered
On April 17, 1912, the day before survivors of the Titanic disaster reached New York, the Mackay-Bennett was sent off from Halifax, Nova Scotia to search for bodies. On board the Mackay-Bennett were embalming supplies, 40 embalmers, tons of ice, and 100 coffins. Although the Mackay-Bennett found 306 bodies, 116 of these were too badly damaged to take all the way back to shore. Attempts were made to identify each body found. Additional ships were also sent out to look for bodies. In all, 328 bodies were found, but 119 of these were badly damaged and thus were buried at sea.

Just 4 days to go until we find out the sex of Pipling!!!
I have a few ideas of things I want to start buying in Pink or Blue after we find out on Thursday.

This is mostly the reason why I decided to have an early 3d scan, cos i can't bare to window shop
for cute Baby items!! Pink or Blue bottles  -  I will probably buy the Tommee Tippee version as i plan to
combine breast and bottle feeding. 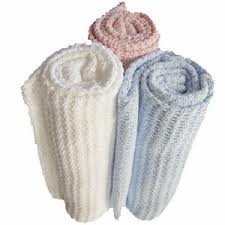 Cellular blankets - I love these for newborns. Obviously I already have some Pink ones, so if it's a boy i'll be spashing out on lots of new ones!! 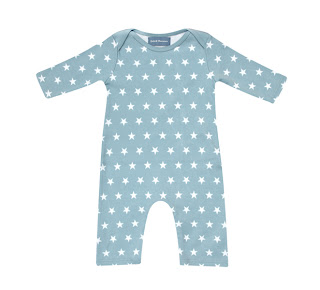 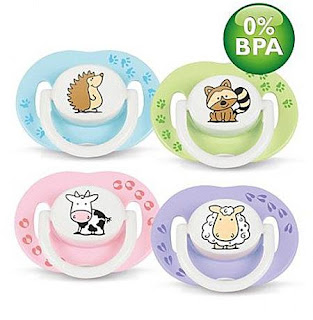 Avent Dummies -  I used a dummy for my first born and she was hooked on them until her 3rd Birthday!  I tried my 2nd daughter with one but she wasn't keen, so she had a conforter instead, she is now 3 and still has her comforter which goes by the name of "nee nee"  I can see her starting school with nee nee, maybe even college haha!!!  SO.. for baby number 3 ive decided to try the dummy!
AVENT or NUK are my favourite because they do very small dummies for newborns.

Although it is still FREEZING out,  i am still very positive that there is some amazing weather just around the corner!!
So i have started getting together a Spring/Summer wardrobe for the girls!
Some of these things I have bought and some are on my list to buy soon :-) 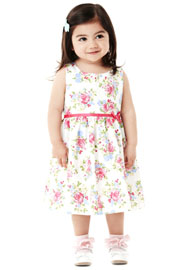 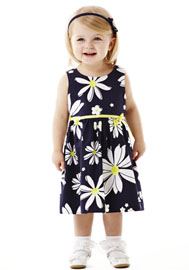 Gorgeous summer dresses from Tesco's - reduced from £12 to £9 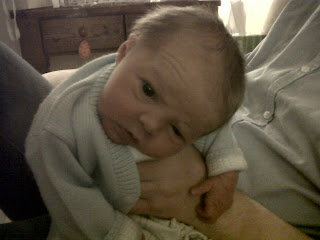 Baby Tyne
Born 26th March 2013 weighing 6lbs 14oz
This is my first time being an Auntie and I am loving every second of it!
I love seeing Amelie and Lottie with their first baby cousin, wanting to help their auntie
look after him.  Amelie has been fabulous with him and I can't wait to see what a brilliant
help shes going to be with our new baby (atleast I hope she is!)
The best thing of all is seeing my big sister become a Mummy... something i could
never imagine really!!!  But here she is, first time Mummy and doing a great job! 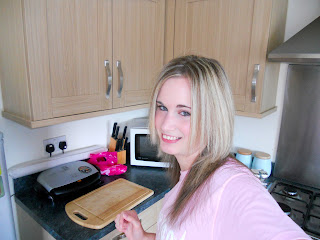 Hello There!
I have decided to start a new blog as I wanted somewhere to record my manic life!
My name is Laura, I'm 29 years old and I am mummy to 5 year old Amelie, 3 year old Lottie and I have another baby on the way due in September (pink or blue?! We find out on April 11th! How exciting!)

I am a childminder, so my life is filled with kids kids kids!!!
I also bake cakes in my spare time (what little of it there is!)

I am looking forward to joining the Mummy Blogging world and hope you'll all enjoy the journey with me! 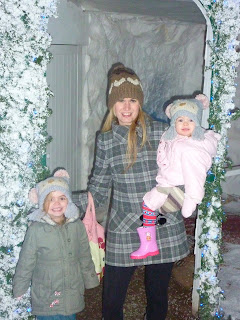 me and my little my angels

Hiya, my name is Laura, i'm a 29 year old Mummy to two little Princesses, Amelie, 5 and Lottie, 3. I am a full time Childminder and expecting my 3rd baby in September!
In the little bit of spare time I have, I like to Bake, Shop and ofcourse BLOG! :-)